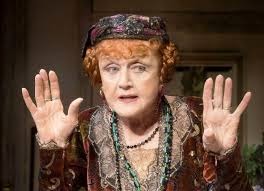 Superstar Dame Angela Lansbury triumphs in this totally delightful revival of Noel Coward’s 1944 comedy. Set in an elegant English country home, a novelist has arranged a séance as research for his new book.

He didn’t reckon with eccentric medium Madame Arcati (Lansbury) who, after cycling eight miles to the house,  accidentally summons up his dead ex-wife. This blithe spirit is not approving of his new spouse and is determined to win him back. So Madame Arcati is called on again to exorcise this ghost, a talent she obviously does not possess. However, she is quite willing to give it a try, and she does, with predictably disastrous results. 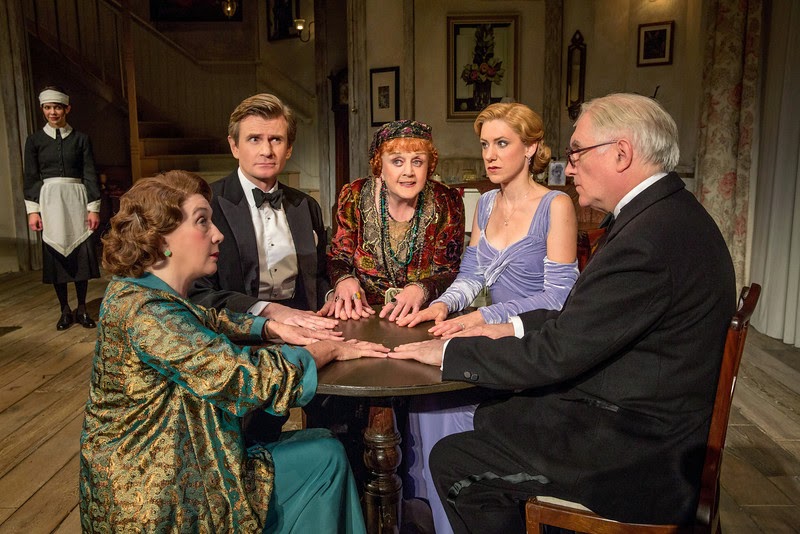 Lansbury is a bundle of energy, even doing the hokey-pokey to connect with the other world, and taking the stage so completely that the rest are in danger of becoming mere shadows.

Charles Edwards is a gallant hero caught between warring wives; Charlotte Parry presents a stiff-upper-lip as his beleaguered present wife; Jemima Rooper is a kewpie-doll ghost with a sensual memory; Simon Jones and Sandra Shipley are a neighboring couple of skeptics, and Susan Louise O’Connor is the daftest maid that ever served high tea.

Directed with impeccably high style by Michael Blakemore, the exquisite set is by Simon Higlett, with lighting by Mark Jonathan and sound by Ben and Max Ringham. The costumes are exquisite, with Lansbury’s colorful outfits by Martin Pakledinaz. Delightful interlude vocals of Coward songs by Christine Ebersole.

After winning accolades in London the show is being launched at the Ahmanson Theatre for its North American Tour. At Los Angeles Music Center, 135 North Grand Avenue, through Jan. 18. Tickets: 213-628-2772 or www.CenterTheatreGroup.org or CTG Box Office.

Also reviewed in January issue of NOT BORN YESTERDAY
Posted by THEATRE SPOKEN HERE by Morna Murphy Martell at 11:23 AM