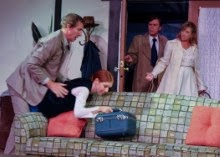 Its very French! The wife will be away for the weekend so he has invited his mistress to visit. His best friend arrives, which shouldn’t spoil the fun, except that the wife is having it off with the best friend.

Now this setup may sound okay to a European audience, but in America its called infidelity and is not considered a joking matter. (As I am also a paralegal in Family Law I can assure you its not!) Still, it’s a farce, and the actors give it their best try. The tangled web they weave is full of good humor and quite delightful complications, but all sadly negated by the underlying sleazy theme. 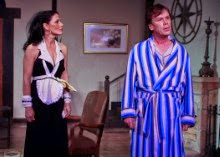 Patrick Burke is an energetic philanderer and Julie Davis is his not-so-naïve wife.  Patrick Skelton is his friend in-deed and Stephanie Colet his bewildered mistress. Stealing the show is Jennifer Laks as a hired cook who manages to make a proper stew, and J. Christopher Sloan is believably Gallic as her genial husband. 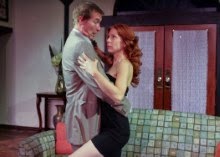 Written by Marc Camoletti (author of the acclaimed Boeing-Boeing), adapted by Robin Hawdon and jauntily directed by Drina Durazo. The charming country-home set is by Chris Winfield and plaudits to dialect coach Glenda Morgan Brown. Produced by Bert Emmett and Dan Sykes for the Group Rep. 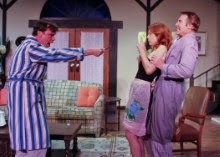 At the Lonny Chapman Theatre, 10900 Burbank Blvd., North Hollywood, through January 25. For tickets: (818) 763-5990 or www.thegrouprep.com. Ample street parking.
Posted by THEATRE SPOKEN HERE by Morna Murphy Martell at 11:27 AM