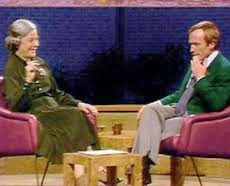 A true story.  Back in 1979 on the Dick Cavett Show author Mary McCarthy, who was known for her acid wit, said that Lillian Hellman “… is tremendously overrated, a bad writer, and dishonest writer…” Cavett asked, “What is dishonest about her?” McCarthy replied. “Everything… every word she writes is a lie, including ‘and’ and ‘the’!” The next morning Hellman, who was famous for her prickly personality and high sense of self-righteousness, started a $2.5 million libel suit against McCarthy, Cavett and WNET-TV.


In a dramatic ’what if?’ playwright Brian Richard Mori has these two dynamic women confront each other onstage, with Cavett himself there to moderate and instigate - as he always did so well. Calling it A Literary Catfight, the NY Times critic said: “It’s hard to imagine this new play without Mr. Cavett’s astringently funny presence, which adds layers of charm and verisimilitude to a slender dramatic reconsideration of a famous literary feud."

So, Dick Cavett stars as himself, Flora Plumb portrays Lillian Hellman, and, reprising their roles from the New York production, Marcia Rodd is Mary McCarthy and Rowan Michael Meyer is Hellman’s caretaker. The play is directed by Howard Storm, whose fruitful career in TV included directing ‘Mork and Mindy’! and who, as a young comic, appeared on Cavett’s show in 1968.

There will also be one performance Sunday, March 1 at the Saban Theatre, Beverly Hills. Tickets at www.ticketmaster.com.

Also written up in the February issue of NOT BORN YESTERDAY
Posted by THEATRE SPOKEN HERE by Morna Murphy Martell at 12:01 PM