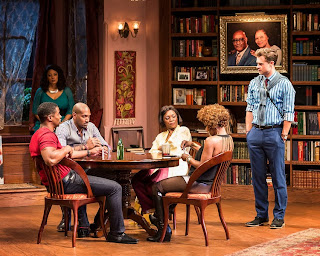 In this African American household, a proudly devout older sister is having to deal with visits from an imperious bi-racial half sister, and a gay older brother who is surreptitiously bringing his white partner to their younger brothers upcoming wedding.

The universal and familiar refrain - ‘don’t marry out of our race, or my religion, or your gender’ - creates an often-uproarious conflict throughout. Here is a new interpretation of the meaning ‘immediate family’ because, in this play, family means you belong, no matter what, and kinship is deeper than partisanship. 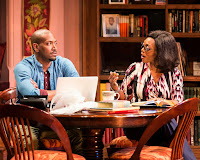 Shanésia Davis is Evy, the devoted teacher with high moral principles; Bryan Terrell Clark is Jesse, whose secret life has him torn between love and loyalty; Cynda Williams is Ronnie, an artist whose paintings capture the dramatic chiaroscuro of her kin; J. Nicole Brooks is Nina, a sassy neighbor and understanding friend; Mark Jude Sullivan is Kristian, a sweet-natured stranger who longs to belong, and Kamal Angelo Bolden is younger brother Tony, the reluctant but serene groom. 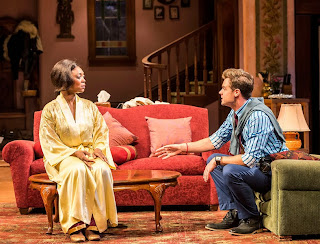 Playwright Paul Oakley Stovall captures the dynamic of family life, complete with its multiple contradictions.
As director, Phylicia Rashad delightedly pulls out all the dramatic stops, as well as the comedic aspects, of sibling rivalry.

The elegant set by John Iacovelli, is lit by Elizabeth Harper, with sound by Joshua Horvath. Exuberant costumes by ESOSA, with wigs and hair by Carol F. Doran. 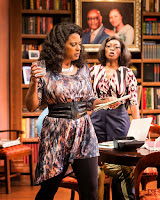 Photos by Craig Schwartz.
Posted by THEATRE SPOKEN HERE by Morna Murphy Martell at 11:52 AM