THINGS BEING WHAT THEY ARE …North Hollywood 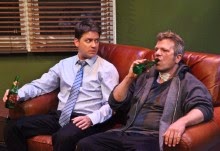 This perceptive and compassionate view of two damaged men trying to keep their lives together is at times hilarious, then bitterly sad, then deeply moving.

There are these two guys see, new neighbors in a condo somewhere in the NYC area, one married, the other divorced. The first is polite and carefully friendly, the other a real big-mouth whose m.o. is to corner you and bray at you non-stop until you are forced to either throw him out or realize he is able to express the very feelings and agonies you have hidden from yourself. We have all been cornered by obnoxious acquaintances, who we have escaped from with a sigh of relief, but what if you discover this person you look on as annoying is the mirror image of your hidden self? 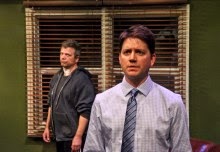 Chet Grissom is adorably obnoxious as Jack, whose brashness hides a tender soul; and Bernie Zilinskas is patience personified as Bill, who clings to a blissful past that no longer exists; while  Stephanie Erb startles in a small, but significant, role as Adele the errant wife. 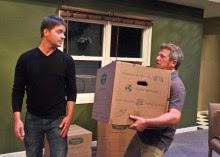 Playwright Wendy MacLeod proves that there is deep drama in a series of discoveries, and the action unfolds subtly but truthfully under Andre Barron’s skilful direction.

Adaptable set is by Stephen Gifford, with lighting by Derrick McDaniel. Produced by Michelle Gillette, Lorianne Hill and Jessica Wierzba.

Also reviewed in the June issue of NOT BORN YESTERDAY.
Posted by THEATRE SPOKEN HERE by Morna Murphy Martell at 3:05 PM