THE GREAT DIVIDE …in Hollywood

In Lyle Kessler’s new play we meet two brothers who were robbed of a mother and are having to deal with their towering aggressive father. The elder son is a drifter who fled years before, the younger is a recluse who secretly writes stories. Although Father is a loudmouth, he has love for his sons, but keeps it as well hidden as the fortune he plans to leave as his legacy.

The first half of the play promises to explore this great divide in families. There is a baseball game that shows togetherness can work, but then it veers away into a series of senseless physical battles. These folk, who live in middle America, seem to reside in a constant state of conflict and rage. When two people climb in the window looking for the eldest son it gets more confusing. Here is a pregnant girl who lacks a uterus (sic), and her demented gun-toting sibling who lost an arm in some catastrophe. 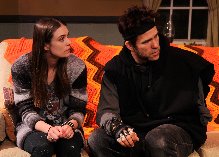