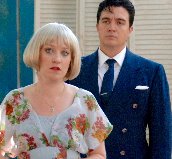 This is a charming update of Moliere’s comedy about a pompous guy who insists on telling everyone what he thinks of them and invariably insults and hurts them. He is in love with a fun-loving gal who enjoys saying clever but nasty quips about everyone behind their backs. They seem to be a match made in heaven, until he is sued for slander and her witty notes to a friend are read by all. Directed and adapted by Tony Tanner, this one hour show, outdoors under shade trees, is a delightful way to spend a summer afternoon. Set in the 1930’s, the costumes and the high-style performances suit the play well and, as in the original, it’s told in verse. 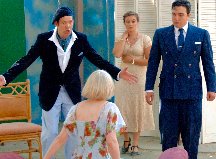 Plaudits to a cast who both vocally and theatrically pervade the open space. Christopher Salazar and Rebecca Lincoln are the delightfully mismatched lovers; Michael Faulkner and Kathy Bell Denton are their amusing antagonists; Thomas Anawalt and Jeffrey Scott Basham are hilarious as foolish suitors; while Christina Jacquelyn Calph and Mike Bingaman bring sweetness into this rather acidic tale. 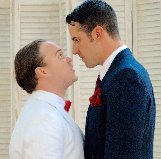 Lovely costumes by Natalie Shahinyan and simply suggested set by Susan Deeley Wells. Produced by Suzanne Hunt and Alexander Wells, this Classical Theatre Lab production is presented by the City of West Hollywood’s Free Theatre In The Parks arts program. 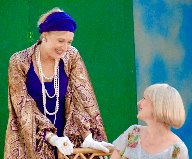