SHAKESPEARE’S LAST NIGHT OUT …in Hollywood 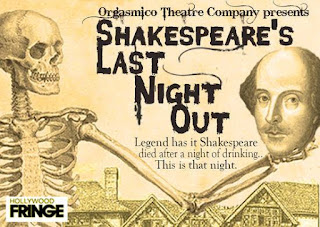 Hey, I thought I knew a lot about William Shakespeare, but in this daring and informative show I learned not only about what makes him tick but also that he could sing!

This is no solemn impersonation of a faceless icon, but a flesh and blood entertainment that gives meaning to what makes a genius. You’ll enjoy Shakespeare’s last night out, carousing with you as he confides his sometimes regretful past, and you’ll learn a few truths you never imagined.

Actor Michael Shaw Fisher wrote the script, and also music and lyrics for 13 amusing tavern songs. Some are so witty it makes you believe he must’ve written those 38 plays after all. In fact, as Will, he scornfully challenges a member of the audience who presumably holds to the theory that Edward de Vere, Earl of Oxford, wrote his plays and poems! 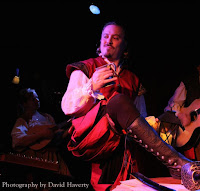 If you love Shakespeare you mustn’t miss it. If you hardly know or care about him then I guarantee you’ll be converted. Even a genius was once a man and Shaw Fisher, under Jeff Sumner’s brilliant direction, brings him to life. It’s no wonder this musical-one-man show won Best Solo Performance at the 2015 Hollywood Fringe Festival. As for the pertinent costume – breeches like that should soon be all the rage!

Photos by David Haverty.
Also reviewed in the October issue of NOT BORN YESTERDAY
Posted by THEATRE SPOKEN HERE by Morna Murphy Martell at 9:43 PM