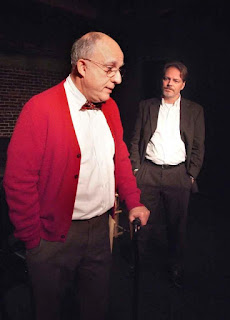 Playwright Allen Barton has the gift of creating real people in relationships and situations that we recognize in our own lives. Far more than a diatribe against Scientology, this is a nearly tragic look at how all organized religions, by their very essence, separate people. Two stories overlap and prove this point, one with terrible sadness, the other with a fearful warning. To be a sane thinking person in a mad world is obviously a major problem in our own society today.

A man (Bo Foxworth) seeks his lost daughter who was sucked into a cult at age 15 after her mother was killed in a car accident that was his fault. He tries to ingratiate himself into the cult and in the beginning finds serenity and an easing of his burden of guilt. Then as the tentacles grow stronger and more obvious he has to decide if his love for his daughter is stronger than his fear of the machine.

The first act is deeply moving as the man is embraced by an elderly music teacher (Dennis Nollette) who helps draw him back to sanity. The bond between them is strong, yet it must be disconnected.

The daughter (Carter Scott), now a young wife, and pregnant, deeply loves her brainwashed young husband (Luke Cook). She longs to escape the same tentacles but, when she faces down the Chairman (Everette Wallin), she must be disconnected.

How that is managed becomes the alarming second act. The only false note is two monologues that spell out what we already grasp and nearly wreck the emotional impact of the play.