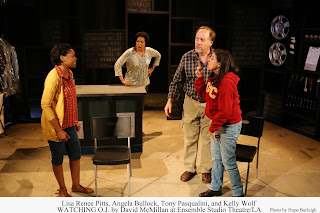 Remember where you were when the verdict in the O.J. murder case came down, and your reaction? Playwright David McMillan takes us back 20 years to a Los Angeles neighborhood where a group of people, black and white, await the verdict, each with their own expectations.

You’ll be riveted as you take this journey with them and perhaps surprised at the contradictory reactions. These are all friendly, civilized folk, tolerant of each others differences, although consciously aware of them. Yet, while one young woman vomits at the ‘not guilty’ decision, another dances. How this is possible is the theme of this profoundly moving play.

All await the decision to the 9-month trial they’ve been following. At first the analysis are light-hearted – after all who could possibly doubt the verdict – it’s only after the decision is read out that the explosion happens and the definition of justice is under scrutiny.

Under Keith Szarabajka’s brilliant direction, McMillan’s compassionate view of  people who are not racists, but in some deep way are separated by race, is explored. Produced by Stephen Burleigh for Ensemble Studio Theatre/LA.