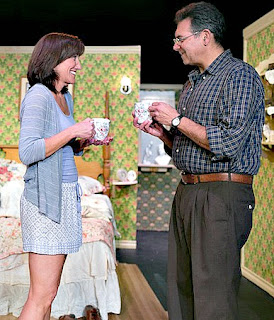 Playwright Jennie Webb has described her work as “domestic absurdism” and in this play the absurd certainly lays waste to the domestic. Here, a sweet middle-aged couple are just getting to know each other after a night of bliss. It is the morning-after in her bedroom and, as they shyly make grasps at intimacy, all hell breaks loose.

Among an onslaught of intruding relatives and friends are a mad sister, a daft kid brother, an office co-worker and an omnipresent dear departed. Hey, you’ve heard of dysfunctional families but this bunch will make the hair stand up on your head, even as you laugh aloud! 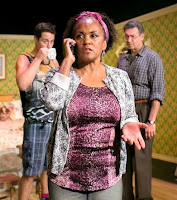 Actually, the couple, Warren Davis and Dale Waddington, were clearly made for each other and, in another sort of play, would have married and lived happily ever after. Still, Webb reminds us, we live in a complicated and threatening world and sometimes our most intimate kin are leading the charge.

Gina Torrecilla as the ball-busting sister, has everyone’s best interests at heart; Josh Stamell, as the loquacious kid brother, has found the key to universal happiness; while Shirley Jordan, as the loyal co-worker, knows that the vicious business world, not love, is our only hope.

Fast-paced direction by Annie McVey keeps the action speeding. Dollhouse bedroom set by Krystyna Loboda is effectively lit by Derrick McDaniel with awesome sound by Stephen Swift, while costumes are by Allison Dillard.

At VS. Theatre, 5453 W. Pico Blvd., Los Angeles, through May 21. Tickets at www.inkwelltheater.com
Photos by Stephanie Fishbein.
Posted by THEATRE SPOKEN HERE by Morna Murphy Martell at 11:33 AM