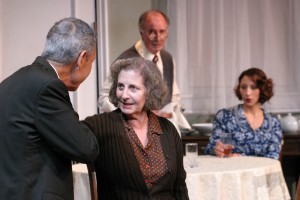 Clifford Odets' passionate, funny and heartbreaking masterpiece about the hopes and struggles of a lower-middle-class, three-generation Jewish family living in a Bronx apartment during the Great Depression continues to resonate after 81 years.

Now the Odyssey Theatre’s critically acclaimed 2015 revival is back by popular demand! This classic family drama, with its theme of parental expectations attempting to crush the dreams of the younger members, is perhaps even more pertinent today than when it first premiered in 1935. It’s the story of every struggling American family torn between the parents’ lofty ambitions and the children’s fight to find a voice.

Among the superb cast reprising their roles are Marilyn Fox as the powerful matriarch; Allan Miller as her old-Commie dad; Robert Lesser as her timid husband; Richard Fancy as her wealthy brother; Melissa Paladino and James Morosini as her beleaguered children. Rounding out the cast are Dennis Madden, Jason Huber, Cameron Jappe and Al Rossi.

Under Elina de Santos' excellent direction this revival is powered by performances where Odets’ voice rings through every character. Pete Hickok provides a neatly designed and handsome 1930’s apartment, while Leigh Allen adds highly effective lighting. Kim DeShazo’s costumes are right on for the period.

The arrangement of the theatre, in which the audience sits on both sides of the stage, lends itself to this production and makes the experience more involving.


Posted by THEATRE SPOKEN HERE by Morna Murphy Martell at 9:49 AM