NEXT TO NORMAL …West Los Angeles 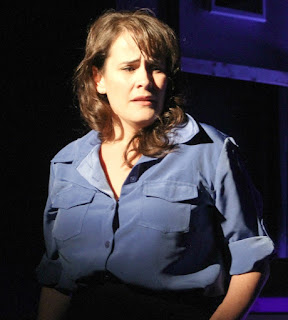 How one family deals with the mother’s mental illness is the gripping story in this rock musical that in 2009 was one of Broadway’s biggest hits, winning three Tony Awards, and the Pulitzer Prize. Its an intense, brutally honest story about a bipolar woman undergoing electroshock therapy, about the impact of her illness on her family, and about the shortcomings of the medical profession’s understanding of mental illness. 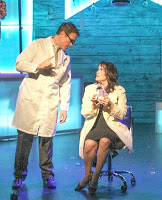 An ambitious subject for a musical, it works because of the honesty and authenticity of its emotions. The creators focus the show on the family's pain, rather than on a critique of the medical establishment, and the hard driving rock and roll score is authentic enough to match the intensity of its emotion. 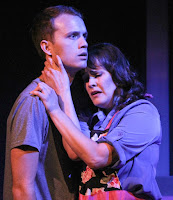 Diana (Michelle Lane) is delusional with grief over the long-ago loss of her teenage son Gabe (Harrison Meloeny). While her husband Dan (Nick Sarando), and her daughter, Natalie (Isa Briones), struggle to bring her back to normalcy, Gabe calls her to join him. Meanwhile, her doctor (Randal Miles) tries what he thinks best, while Natalie fears that her relationship with Henry (Blaine Miller), the boy she loves, will be scarred and empty.

Directed by Thomas James O’Leary, with book and lyrics by Brian Yorkey and music by Tom Kitt. The five-piece band is conducted by music director Taylor Stephenson. A Triage and Standing Room Only co-production. Photos by John Dlugolecki.

Also printed in the September issue of NOT BORN YESTERDAY
Posted by THEATRE SPOKEN HERE by Morna Murphy Martell at 7:52 PM