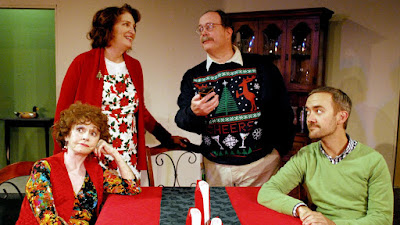 This delightful play finds us celebrating Christmas in Minnesota with an emotionally reserved Norwegian household where hugs are verboten and emotions blocked by jokes. (My heritage is Irish but the dynamic in these relationships was familiar.)

A son comes home to find his widowed mother cooking in the kitchen; garrulous grandma visiting from Florida; his doctor brother grieving over his bad marriage; his sister explaining how she’s a gay mom; his sister-in-law demonstrating all the signs of a nervous breakdown, and Uncle Bob wooing the lady of the house with flowers and mushy demonstrations of affection.

Greg D. Barnett is the journalist son who decides to write an article on his wacky family; Marcia Rodd is a scene-stealer as the grandmother whose wicked sense of humor takes the mickey out of everyone; Belinda Howell is the mother who tries to calm every situation with the production of food, while Fox Carney is her shy lothario joining the party uninvited.

Patrick Burke is the son reeling from a marriage break-up and family secrets while Rebecca Dunn is his hysterical but loving wife. Truett Jean Butler is the daughter who has a problem explaining the origin of her child to people who don’t get that she’s gay.

Author Phil Olson’s latest family comedy was a well-deserved recent winner of The McLaren Comedy Festival in Midland, Texas. Doug Engalla directs with flair and the set by Chris Winfield is superbly inviting.