THE CONSUL, THE TRAMP AND AMERICA’S SWEETHEART …in Beverly Hills 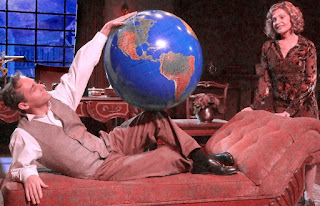 In late 1939, the Nazi German Consul in Los Angeles blackmailed Hollywood studios from making pictures critical of Hitler by threats of banning their films in the German and Austrian markets. In this engrossing new play, he visits United Artists head Mary Pickford to demand they stop filming Charles Chaplin’s The Great Dictator.

Capturing the style and private personalities of the famous is a challenge and author John Morogiello does it brilliantly. 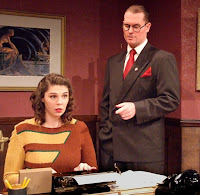 He truncates a month’s long event down to a gripping and ultimately satisfying 90 minutes, illuminating the ever ongoing right of an artist to speak truth to power.  Chaplin himself goes nose to nose with this fascist bully in scenes that are as delightful as alarming. No need to describe the parallels to our own era, it's all there.

Brian Stanton is a marvel as Chaplin, a mercurial but shrewd delight as he confronts this enemy of freedom and decency; Melanie Chartoff as Mary Pickford, transcends the meek onscreen sweetheart role to show the strength of an astute dynamic woman; Shawn Savage is the epitome of an arrogant Nazi official with a caustic sense of humor, and Laura Lee Walsh is bold and delightful as the fly-on-the-wall secretary who shares her story with us.

At the Reuben Cordova Theatre, 241 S. Moreno Dr. BH, through Dec 18. Tickets: 310-364-0535 or www.theatre40.org
Photos by John Morogiello.
Also reviewed in the December issue of NOT BORN YESTERDAY.
Posted by THEATRE SPOKEN HERE by Morna Murphy Martell at 12:54 PM