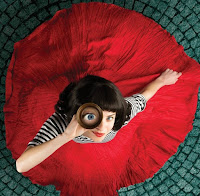 For those who remember the 2001 movie, “Amélie” is about a painfully shy young girl alone in Paris, the odd characters she befriends, and her mission to bring joy to others. When she falls for a troubled boy she flees, but when the boy chases her she puts him through a number of tests and, when he persists, Amélie finally must decide whether to open the door to her home, and her heart, to him. 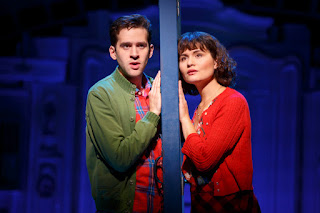 The French film was nominated for 5 Oscars and is listed among all-time favorites by many film critics. I never saw it and, in this otherwise charming stage version, I had difficulty figuring out what was going on, so perhaps one had better see the movie first.

Most of the song lyrics, that clearly are intended to carry the story along, were difficult to comprehend in the huge Ahmanson. In a smaller theatre one might more clearly understand the lyrics, and see the facial expressions, but here much of it was miniaturized into a distant pantomime. 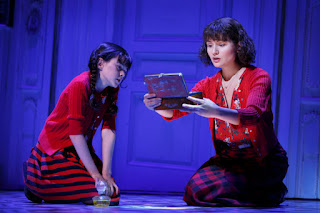 Leading the large and excellent cast are winsome Phillipa Soo as Amélie, dynamic 10 year old Savvy Crawford as Young Amélie, and spirited Adam Chanler-Berat as Nino.
This pre-Broadway run is directed by Pam MacKinnon, with book by Craig Lucas, music by Daniel Messé, lyrics by Nathan Tysen and Messé, choreography by Sam Pinkleton, musical direction by Kimberly Grigsby, and orchestrations by Bruce Coughlin.