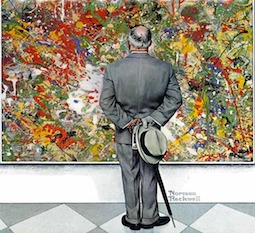 This delightful play has already been getting rave reviews from all the LA critics and here’s my addition to the accolades. The story is simple, full of witty humor, but moving. A woman in a trailer park has bought a supposedly original Jackson Pollock for $3 in a thrift store. It is certainly good enough to interest a renowned art expert from New York to travel to California to appraise it.

As should be expected there is a clash between the blunt and saucy ex-bartender and the snobbish and repressed ex-director of the Metropolitan Museum. Who actually knows the truth and, in the end, does it really matter? 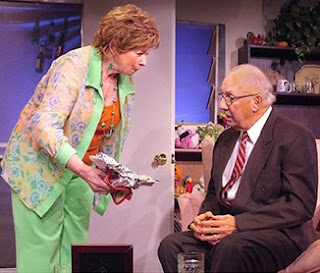 Author-director Stephen Sachs probes the hearts of two people passionate about the genuine article – whether in art or humanity. Inhabitants of different worlds, they dodge and parry over far more than a mere painting. With two brilliant actors at full gallop, we witness a magnificent battle of wills as Maude (Jenny O’Hara) fiercely challenges Lionel’s (Nick Ullett) complacent surety that he is the ultimate expert on authenticity.

The fabulous trinket-filled-trailer set is by Jeffrey McLaughlin, with subtle but effective lighting by Bill E. Kickbush, and sound by Peter Bayne. Costumes by Shon LeBlanc, and props by Terri Roberts, cleverly illuminate the class differences. Produced for Fountain Theatre by Simon Levy and Deborah Lawlor. 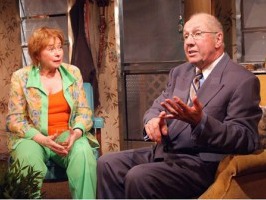 Also reviewed in the January issue of NOT BORN YESTERDAY.
Posted by THEATRE SPOKEN HERE by Morna Murphy Martell at 11:18 AM