In 1915, co-founders of the NAACP, W. E. B. Du Bois and Mary White Ovington, find themselves alone in the New York office on a Sunday morning. He is about to resign as editor of their magazine, THE CRISIS, because the Board claims he is alienating white supporters.

She is speaking for his detractors, not because she agrees with them but because his presence and his message on race is the core of the mission of the NAACP.

Author Clare Coss never lets us forget that Du Bois and Ovington were flesh and blood people, divided by race but joined together by a passion for truth and justice. It’s a play of ideas, but also a love story of two people who recognize the value of honesty no matter how much it endangers one’s relationships.

Ben Guillory is majestic as Du Bois, dominating the action with his presence and strong voice. Melanie Cruz, as Ovington, subtly reveals the inner strength of a woman of strong principle. However, a lot was lost when too often her voice dropped down to conversational level. 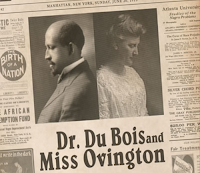 Final Note: As the audience was leaving, an elderly lady tripped over a downstage platform on the set and fell. Someone needs to stand guard at each performance as this is a hazard to the departing audience.