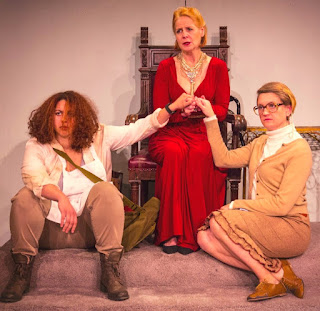 In Jennifer Barclay’s delightfully absurdist comedy, a formidable mother sits regally on a throne-like chair dressed in a blood red gown. It’s a madcap view of familial relationships, when we meet the three daughters under Helen’s thrall. Clearly, she wields power by alternately loving, bossing and denouncing each in turn. Meanwhile, the family steakhouse is failing, her husband is traveling far away, and Helen’s sense of reality seems to be deteriorating. When the youngest daughter brings home a young man from Europe, who she plans to marry, everything explodes and eventually implodes.

There are surprises in every confrontation, nothing is as we expect: the seemingly meek eldest gal has secret power impulses, the lumbering center sister has an inner sylphlike spirit, and the youngest gals inability to recognize deceit leaves her dottily vulnerable. Still it is mother, Red Helen, who dominates the action. Her power is seemingly immense, until the siblings clash and a number of secret discoveries threaten to sweep her away. 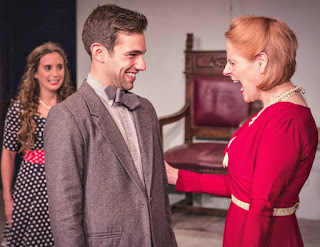 The marvelous cast are headed by Lynn Odell as the fierce matriarch; Channing Sargent as the enigmatic eldest daughter; Amanda Celine Miller as a gentle giantess; Sigi Gradwohl as the doll-like naïf, and Greg Nussen as her romantic/crafty/horny suitor with a devilish grin.

This world premiere event is directed at full farcical gallop by Bill Voorhees, with jaunty costumes by Shelby Saelens. Produced by Chantelle Albers and Matt Orlando.

Also reviewed in the May issue of NOT BORN YESTERDAY.