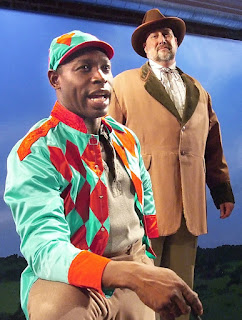 Inspired by a true event in 1813, when enslaved Simon Cato, a proud and sassy champion jockey, publicly taunted future president Andrew Jackson, an avid horse owner, for being a poor loser. In Carlyle Brown’s meaningful drama, we meet the intrepid Simon in Kentucky, just prior to the Civil War, where he has been rented out to jovial Colonel Wiley Johnson to ride his horse, Pure Confidence. 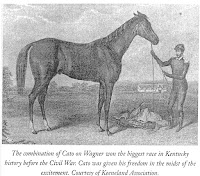 It’s a study of an unlikely friendship as Simon, aware of his value to the companionable Colonel, boldly uses that to negotiate for his freedom. He is helped by the Colonel’s indomitable wife, Mattie, who is unaware of her paternalistic attitude to her bondswoman Caroline. 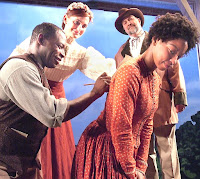 Plaudits to author Brown who subtly reveals that, in contrast to the film world’s sadistic image of slavery, everyday indignities also have the power to crush a person’s spirit.

Strong backup by William Salyers (the Colonel) who blithely ignores the complexity of race relations; Deborah Puette (Mattie) whose heart is in the right place even though her actions are often condescending; Tamarra Graham (Caroline) who projects a docile yet deeply strong individual, and Eamon Hunt and Dylan John Seaton in multiple roles. 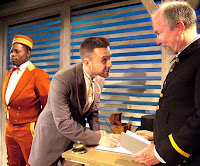 Posted by THEATRE SPOKEN HERE by Morna Murphy Martell at 11:22 AM