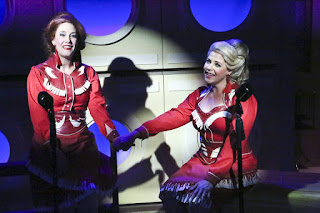 It’s a rootin’ tootin’ good time at the local Laundromat where, along with the entertainment, you even get your clothes washed and dried. In this delightful show, two gals with a love of Grand Ole Opry find their personal lives illustrations of the plaintive country songs they always sing. Well, since the music biz won’t open its doors to them, they decide to create their own steamy Nashville venue, the Washateria Honky-Tonk Opry!

When, with cleverly provided scenery, lighting and sound design, they turn the Wishy Washy Laundromat into a nightclub, they prove to be a great song and dance team. While melodiously blasting their revenge against the men that done ‘em wrong (some apparently in the audience) we see how those shiny-red Boots Are Made For Walkin’ – which, along with Stand By Your Man and Independence Day, is just one of the rousing numbers in this song-filled show.

Bets Malone and Misty Cotton are both in fine form whether washing or warbling. Malone leads as the proprietress with a good heart and powerful singing voice. Cotton is her wacky assistant who is shy with customers but a hellcat with the men in her life.

Written and directed by Roger Bean (creator of the Wonderettes & other series) who cleverly builds this battle-of-the-sexes story around a string of rousing country songs. With lively choreography by James Vásquez, dazzling costumes by Renetta Lloyd, and droll hair/makeup by Byron Batista.

Also reviewed in the September issue of NOT BORN YESTERDAY
Posted by THEATRE SPOKEN HERE by Morna Murphy Martell at 1:11 PM