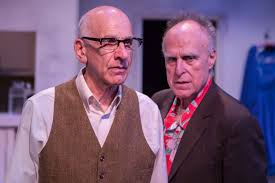 This intriguing play, by British author Oliver Cotton, is about two Jewish brothers who, in their youth survived the Holocaust, then reconnect after a 30 year rift. The younger one has a secret that he believes can bring satisfaction and closure to their past trials. Without giving away the surprises in the plot, let’s just say their brotherhood bond is being tested to the limit. The play vehemently touches on the question of justifiable revenge, but in the end focuses on loyalty and leaves the moral dilemma unresolved. 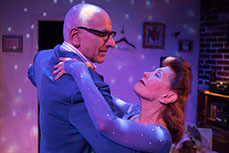 The parallel story of a past love affair distracts from the glaring question: Is seeking revenge for evil actions in the past, justice or murder? Although the author makes good points about the danger of denying one's past, I wish what could have been a serious ethical debate had not turned out to be a family drama about lost love. In fact, I would have enjoyed an after-show discussion on the theme.

Richard Fancy is an emotional tyrant as the long-lost brother Billy, while George Wyner’s Joe displays outward calm as he desperately tries to hold on to his once calm life. Sharron Shayne, as the practical Elli, shows the pain and wonder of being torn between two strong men.

This Rogue Machine presentation is produced by John Perrin Flynn, and expertly directed by Elina de Santos, with a naturalism that, unfortunately, often left us unable to hear the dialogue.