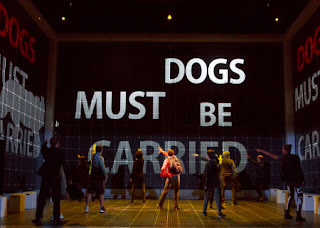 In this highly theatrical show we are inside the mind of an autistic 15 year old with a brilliant mind, but the inability to empathize with the people around him. The story begins with the cruel stabbing to death of a neighbor’s dog with a gardening fork.

Adam Langdon is extraordinary as the youthful Sherlock who sets out to discover the murderer, while the people who care for him can hardly comprehend him. With never a false note, Langdon segues from trembling fear to keen observation to physical dexterity to absolute scientific genius. He even flies!

In the process of his quest for understanding the world he inhabits, the boy moves from a quiet British village to the clanging dazzle of London. As it’s theater I had to accept the personal resolution, happy-ending, premise. However, in the real world I’d be calling in Child Protection Services!

Hey, it received 5 Tony Awards, including Best Play, so who am I to wanna protect this vulnerable boy from future harm.