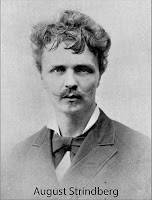 August Strindberg wrote scathing plays, exposing the hypocrisies within class conflict and modern marriage in his Swedish society. When, as a young actress, I played Miss Julie I was hooked on his understanding of female sexuality and the rage concealed within a rigid class system. In this tragical comedy, The Dance of Death, he tackles the game-playing in marriage and it’s a no-holds-barred Battle of the Sexes.

According to director Ron Sossi, “This play is often considered a precursor to Albee’s Who’s Afraid of Virginia Woolf and Sartre’s No Exit. Three people trapped together in hell. It’s claustrophobic and eerie and delightfully venomous.” 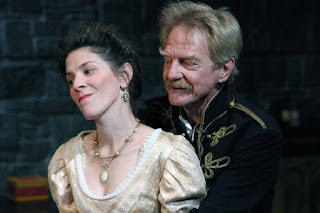 Living on an isolated island military base, gruff quixotic artillery captain Edgar holds his bitter former-actress wife Alice in vicious thrall. On the eve of their 25th wedding anniversary, as the two face off in a fierce battle of wills, into this dungeon of poisonous invective comes Alice’s ingenuous cousin, Kurt.

Soon, all unknowingly, he is ensnared in the couple’s wicked game and we witness his transformation from decent fellow to raging bull.

Presented by the Odyssey Theatre Ensemble, produced by artistic director Ron Sossi in association with Isabel and Harvey Kibel.

Photos by Enci Box.
Also reviewed in the November issue of Not Born Yesterday.
Posted by THEATRE SPOKEN HERE by Morna Murphy Martell at 11:40 AM