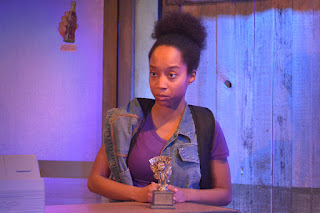 Three years after the wreckage of Katrina, a 14-year old girl, who feels unloved, runs away from her embittered and angry mother. Set in New Orleans' Lower 9th Ward, where adults are fighting to keep their damaged homes, the play focuses on this teenager’s angst. However, when we meet her she is stealing from a local shop owner who inexplicably offers her a job. Later, when we understand why she is alone, our sympathies shift to her mother’s fight to survive as we become aware of the social issues behind abandonment. 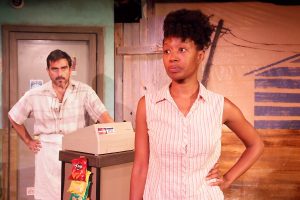 Written by Jeremy J. Kamps, and directed with passion by Shirley Jo Finney, the fine cast bring these people to life. Camille Spirlin is an impish brat as Kali, Maya Lynne Robinson a beleaguered soul as her mother, and Armando Rey kindness itself as the shop owner.

Fountain co-artistic director Stephen Sachs states, “Our mission is to use theater as a vehicle to raise awareness and empathy for the human condition.” A portion of all ticket sales will be donated to the Houston Food Bank in Texas!

I am reluctant to complain but, due to the southern accents, and the speed and pitch of Kali’s monologues, much of the dialogue was unintelligible. Also, the play runs 1 hour 40 minutes with no intermission, which for audience members needing a break meant disturbing the entire show by walking conspicuously through the action.