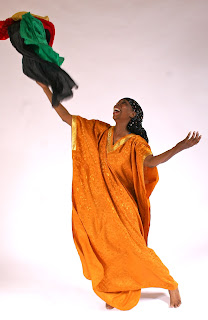 I finally got to see the work of this international dance company at The Wallis in Beverly Hills. In a three day celebration of the legacy of Martin Luther King Jr., they gave dramatic expression to incidents in black history.

Choreographer Lula Washington does not flinch from confrontation. 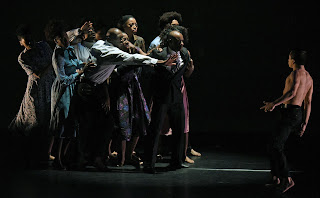 In The Movement a white man throws objects at a group of walking protesters, then Michael Tomlin III, as Dr. King, expresses his anguish in an emotional solo while photos of lynchings and other horrors unreel on the backdrop.

The Little Rock Nine is a tribute to the nine African-American students who bravely integrated Arkansas’ Central High School in the fifties. Krystal Hicks is poignant as Minnie Jean Brown, the girl being jeered and spat upon in the famous photo. In We Wore the Mask Tamica Washington-Miller recites Paul Lawrence Dunbar’s poem, as a lone, masked figure yearns to join a joyful group of dancers. 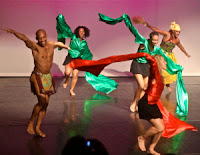 Not all the pieces were as grim. Global Village was an upbeat, Afro-Jazz number with colorful, flowing, non-stop action. Then Saidiya Imari, as Rosa Parks, danced a subtly ironic solo on taking her seat on the bus.

Internationally recognized for its unique blend of African, Afro-Caribbean, Modern, Street Dance and Jazz techniques, this is more than just a modern dance company, even though all the different styles could come under that one heading.

Also in my theater column in February’s NOT BORN YESTERDAY.
Posted by THEATRE SPOKEN HERE by Morna Murphy Martell at 9:26 PM