BUGABOO & THE SILENT ONE …in Hollywood 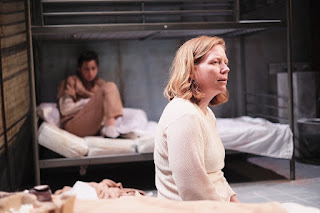 Set in the present, in a cell block of a County Jail in West Virginia, an inmate named Bugaboo (Heidi Sulzman) has been alone in her cell for a month and a half. Freaking out, she talks to God, to herself, and the not-unkind jail guard (Michelle Gardner).

She finally gets a cell-mate (Jacqueline Toboni) who doesn’t talk, but rolls herself into a ball and cowers in the corner of her bunk. So Bugaboo decides she will save the soul of this little sinner, who she nicknames The Silent One. 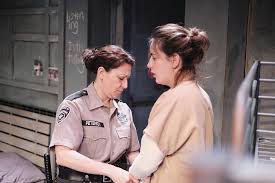 Each woman is awaiting final sentencing and both face 25 years to life in prison. However, it’s soon clear that they are each desperate for something outside of themselves.

Although two very different types, it’s obvious both have a desperate need for a friend to talk to when darkness envelops ones spirit. It becomes a moving character study about ordinary women in distress, and Sulzman and Toboni play it faithfully and eloquently. 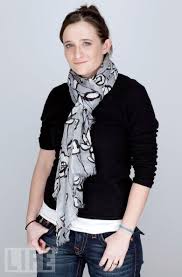 Credit goes to writer/director Marja-Lewis Ryan who captures the dynamic between lost souls and has a compassionate view of the pressures on people within a jail.

At the Lounge Theater, located at 6201 Santa Monica Blvd, Hollywood, through February.  For tickets: (800) 838-3006 or batso.brownpapertickets.com.

Also in my theater column in February’s NOT BORN YESTERDAY
Posted by THEATRE SPOKEN HERE by Morna Murphy Martell at 9:04 PM