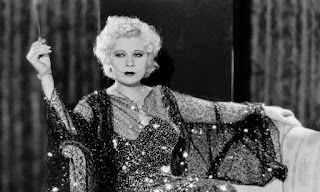 Just saw this Mae West 1926 comedy and am still laughing at this delightfully outrageous show that captures West’s insolent and sexy oeuvre perfectly. The fact that West was arrested for indecency and spent 10 days cheering up the women prisoners (and probably the guards) while serving her sentence, now boggles the mind. Well, there are always small-minded censors who run aghast at the suggestion that sex might be fun while probably guilty of far nastier sexual adventures of their own. The audacious writing in SEX reminds us of the many brilliant films she later wrote and performed in before the Hays Office closed her down. 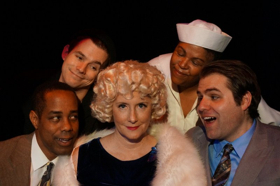 Director Sirina Irwin is faithful to West’s over-the-top style that makes sex an innocent pastime with harmless vulgarity. The entire cast pull out all the slapstick stops to create a musical comedy that does not date.

Others play numerous parts. Davey Johnson goes hilariously from sleazy pimp to snotty butler while David Errigo does sailors, a maid and also dances to He Would Row Row Row with saucy choreography. Kandace Lindsey is memorable in her dynamic Latin dance number, Perry Brown dominates as a cop and a CEO, and Carla Valentine slips easily from male to female roles with nary a minute to change. The lavish costumes are by Michael Mullen whose fabulous choices I have reviewed often in classy local shows.

Posted by THEATRE SPOKEN HERE by Morna Murphy Martell at 10:07 AM