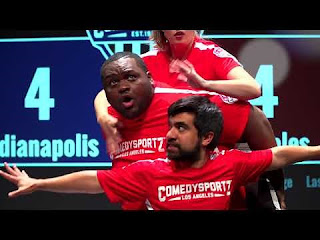 Comedy Sportz of Los Angeles is a comedic improv institution, performing in the North Hollywood Arts District since 1988.  Over the years they have organized groups worldwide and come together in various cities to have their teams compete, literally, for laughs. In the historic El Portal Theatre, packed with a cheering crowd of fans, the highly entertaining competition pitted city against city in a series of theater games that ranged from "Try That On For Size" to "Musical Comedy" and "Best Oscar Moments”!  All to comedic effect as energetic referees took suggestions from the audience, wryly commented on the performances, and enforced the rules. 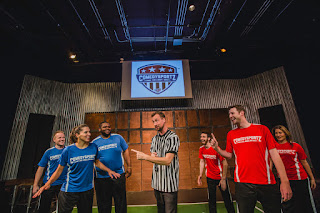 The show is PG-13 and any player who dared utter an untoward comment, or slip in a dirty word, had a brown bag placed on their head for the duration of that game.  (They also had a special brown bag for an audience member who violated this rule.)  Also, when a player's action, dialog, or joke elicited a groan from the audience, their team lost a point. Singing, character work, and physical comedy were delivered spontaneously.  The secret of improve is listening, not denying, being true to the scene, and these performers tapped into that place where something magical happened each time. 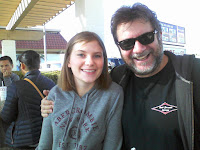 This was a high-energy spontaneous demonstration of Instant Theater. It was fast, it was fun, and often hilarious enough to bring tears to many eyes. The crowd rooted for their favorites, the players pushed their limits, the refs keep things moving and everybody, performers and audience, came out winning. Over 25 cities from Los Angeles to Manchester, UK, were competing during this popular 3-day Comedy Showdown. The tournament culminated with the World Championship match and the winner was CSz LA, 28-25, over CSz Twin Cities fabulous team.