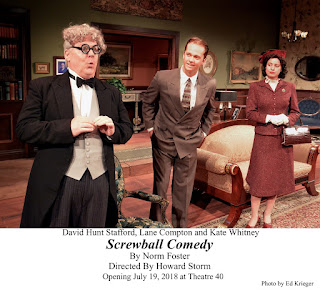 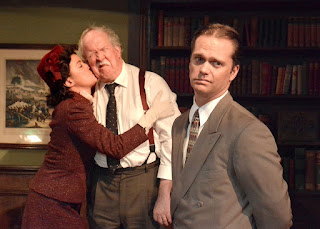 'Screwball comedy' refers to the American genre of story-telling which had its heyday in the 1930s & 40s. The elements included a male and female who are adversarial at first, but are ultimately ideal for each other; some farcical or slapstick action; a female with the upper hand in the relationship, snappy patter and crackling dialogue. And in this case, sexual tension!

With a superb cast that sparkle with audacity, this U.S. Premiere of Canadian playwright Norm Foster’s Screwball Comedy is both homage to as well as an example of the genre.
The year is 1938 and aspiring reporter, Mary Hayes (Kate Whitney), is struggling to break into the male-dominated world of journalism. Jeff Kincaid (Lane Compton) may be the hottest reporter in the city, but his boss (Daniel Leslie) is fed up with his shenanigans so his job is on the line. Ambitious Mary might be the one to replace him if only she can resist his manly charm.

Like the zany comedies with Gable vs. Colbert, or Hepburn vs. Tracy, let alone Rosalind Russell vs. Cary Grant, this delightful play crackles with wit and humor! Under Howard Storm's I-dare-you direction David Hunt Stafford almost steals the show as the Percy Dovetonsils butler and everyone else are at the top of their game.

In this new play, writer-director Murray Mednick explores two distantly connected relationships: that of Soviet dictator Joseph Stalin and his wife Nadya, and of poet Vladimir Mayakovsky and his married lover and ‘muse’ Lilya Brik. The emphasis is on the tumultuous  days of the Revolution that affected the personal lives of very different people - artists and politicians.

It’s a dramatic character study incorporating historical footage and photos. Sadly, it focuses mainly on the brutal suicides of tormented Vladimir (Daniel Dorr) and raging Nadya (Casey McKinnon) that makes for a sad and rather grim two hours. Historically interesting, the image of Stalin (Maury Sterling) is unsurprisingly frightening, while the irrepressible Lilya (Laura Liguori) illuminates the carefree sexuality of the 20's and 30's.

We learn how Mayakovsky was a giant rebel in 20th century Russian literature who was turned into a symbol of the repressive state when, after his death, dictator Stalin declared: “Mayakovsky is the best and most talented poet of our Soviet epoch.” Hailed as The Poet of The Revolution, Mayakovsky’s legacy was censored and intimate or controversial pieces were ignored. According to Boris Pasternak, this Stalin-sanctioned canonization dealt Mayakovsky a second death.
At The Lounge Theatre, 6201 Santa Monica Blvd. Hollywood.

Also noted in the August issue of Not Born Yesterday.
Posted by THEATRE SPOKEN HERE by Morna Murphy Martell at 9:49 AM