ONE NIGHT WITH JANIS JOPLIN... in Pasadena 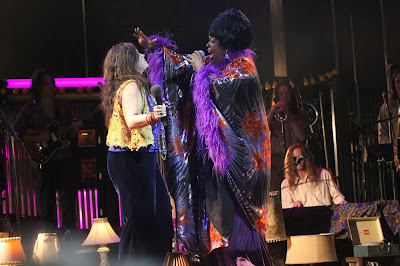 This is a full concert and musical journey that vigorously explores the influences that made young Janis Joplin into a rock 'n' roll legend. It’s been said, “With a voice like whiskey and a laugh like pure joy, simultaneously rough and vulnerable, Joplin proved music wasn't just a man's world anymore.” Brilliantly written and directed by Randy Johnson, “One Night With Janis Joplin” also shines a spotlight on the artists who inspired her, including Bessie Smith, Etta James, Odetta, Nina Simone and Aretha Franklin.  It’s a dynamic show, with Mary Bridget Davies amazingly real as Janis Joplin, and Sabrina Elayne Carten awesomely versatile as all of her black-singer muses.
I was never a Joplin fan, but I love Davies’ energy and appreciate her vivid impersonation, even though I hardly understood a word she sang.  However, I was blown away by Carten’s totally amazing versatility.  At first by her range – she enters singing an operatic “Summertime” that wowed us – but wait – she went on to sing the blues, soul, jazz, and dynamic rock ‘n’ roll.  Every time she opened her mouth she conquered the style and belted out powerfully - and you understood every word.
At its Portland, Oregon premiere in 2011 one critic wrote: “If you never got the chance to see Janis live or on film, this feels as close as you’re going to get.”  I couldn’t agree more.  It’s a trip back to the wild free-spirited 1960’s with a live, long-haired, on-stage band creating authentic rock 'n' roll and beautifully backing numerous classic songs.
Plaudits to the creative team that includes Len Rhodes (Musical Arranger), Justin Townsend (Set and Lighting Design), Jeff Cone (Costume Design), Carl Casella (Sound Design) and Darrell Maloney (Projection Design).  Presented by The Pasadena Playhouse in association with Todd Gershwin and Daniel Chilewich of One Night Productions.
The Pasadena Playhouse is located at 39 South El Molino Avenue, Pasadena.
For Tickets and Information: (626) 356-7529 or www.PasadenaPlayhouse.org.  Playing through April 21.