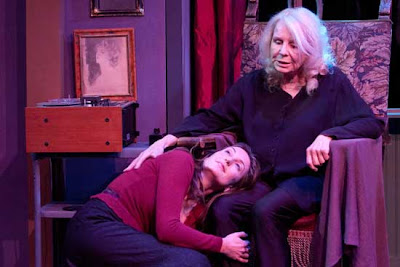 In preparation for a major theatrical production of “Macbeth,” a young film actress comes to beg a legendary hundred-year old doyenne of the American Theater to coach her for Lady Macbeth.  To play a legendary figure requires a great actor and, from her first entrance, Salome Jens is comfortably at home in this role.  Just to see and hear her delineate the process whereby a great performer probes and questions the reality of a fictional character is the jewel in this crown.  Even during intermission she is onstage, wraith-like, silent, but oh so real, hardly noticed by the chattering audience regaining their seats, but she is Abigail Booth – a once great stage star ready for her next entrance.
If you love theater and have a passion for Shakespeare (as I do) don’t miss this play!  There will be stretches that try your patience, but there will also be – whenever Jens is onstage – transcendental scenes.  As her character says, not many reach those heights and it’s all gone in a moment, but here is an actress with subtle power and her lesson on acting will ring in your heart with sadness and ultimately, joy.  So, go!
Playwright Donald Freed has set the play in the year 2000, with a radio announcing that George W. Bush has been awarded the presidency.  How this parallels the passing of America’s golden era in theater, and whether the modern film actress found her destiny in the end, never became clear.  However, Freed’s strength is in revealing the inner workings of a stage genius, not intellectually but viscerally, and persuading us how it is, and was, and might have been.
As the film star, Jenn Robbins bustles in, water bottle in hand, a modern gal worshiping the myth of a great past but unable to attain the soul.  When she gives voice to Shakespeare’s words, spoken loud and strong, she is impressive, but too often her character appears facile and smartass.  As James Booth, Kevin Quinn stepped bravely in with script in hand, as a fast replacement for Shakespearean master Geoffrey Forward who was unable to make this performance.  Quinn was good, but exactly who his character was, and what he signified in the play, was enigmatic and unresolved.
Damian Cruden directed with classical dignity and able assistance from Stephanie Kerley Schwartz (Sets and Costumes); Jeff McLaughlin (Lighting Design), and Christopher Moscatiello (Sound Design).
This world premiere staging of “Tomorrow” is a co-production by LA’s Skylight Theatre Company, Rogue Machine Theatre, and Britain’s York Theatre Royal.  Playing through May 5 at the Skylight Theatre Complex, 1816 N. Vermont, LA.  For Reservations: (702) 582-8587 or http://www.ktcla.com.