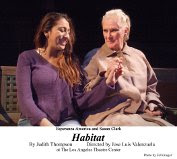 To quote Canadian playwright Judith Thompson “This play is dedicated to every group home struggling to survive in a hostile neighborhood.” If you go expecting some nice little story of people getting together with hope and understanding – forget it!  Sadly, there are no hearts and flowers on Mapleview Lane, but these bad kids are really intolerable. Even their leader is a villain and all the good intentions in the world won’t help.  In this brutal world parents and children are at war, friends are tormentors, yet no one is really to blame.  It’s an angry commentary on our times and seemingly there’s no recourse – just desolation and rage.
Leading the dynamic cast is Susan Clark (Margaret) as an elderly resident who sees the danger but finds herself drawn to Raine (Esperanza America), a troubled young girl, with tragic results.  Sal Lopez (Chance) is the advocate for troubled youth whose own demons are being roused by mischievous inmate Paul Nguyen (Sparkle), and Nina Silver (Janet) is a daughter, a mother and a lawyer torn by conflicting emotions.
Powerfully directed by Jose Luiz Valenzuela, with impressive use of the huge stage by Tesshi Nakagawa (set), Cameron Mock (lighting), Carlos Brown (costumes), and, if a bit overwhelming, John Zalewski (sound).
Produced by Latino Theater Company. Los Angeles Theatre Center, 514 S. Spring St., Los Angeles.   Sat. 8 p.m., Sun. 3 p.m.  Tickets at (866) 811-4111 or www.thelatc.org.
Posted by THEATRE SPOKEN HERE by Morna Murphy Martell at 11:52 AM