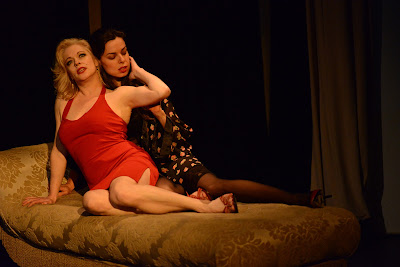 We all have our luminous memories of Marilyn Monroe but this lovely evening spent with her won’t diminish the glow.  If you are seeking the answer to what makes a Goddess you may not find it here, but you will get some insight into what makes a Star.

Like all great film actors, Marilyn radiated a magic all her own.  This dramedy with songs fleetingly captures Marilyn – then she’s gone – but Kelly Mullis deserves applause for her delightful, loving impersonation.  The charming, ebullient, angry child is all there and told directly to us by the impish Mullis.

Monique Marissa Lukens is persuasive as domineering acting coach Natasha Lytess, but too caricaturish as Paula Strasberg.  As American blond stripper Lili St. Cyr, Katarina Radivojevic is totally miscast but makes up for it by being impressively sensuous and daring.  Jamie German is totally believable as a cold manipulative Bobby Kennedy and also as a dude looking for an easy lay.

As we are drawn into the play, the question of where authors Willard Manus and Odalys Nanin got their facts becomes relevant.  I’ve always considered many of the stories they chose, from the tabloids and other sources, unreliable, e.g. the number of abortions she had; the boy child she gave birth to at 14 and gave up; the myriad lovers famous and unknown; the bar pickups where after sex she revealed mischievously “You just f***** Marilyn Monroe”; the numerous lesbian affairs (when did Marlene Dietrich have time to make films?); the Kennedy brothers cruel manipulation of her.  Were these facts or rumors?  Some probably true, but others questionable.  Happily, the question behind her untimely death is left ambiguous.  That’s for us to decide: Suicide? Accident? Murder?  Manus and Nanin leave that answer up to us.

Theatre, as we know, has its own rules and being entertaining is more important than biographical facts.  If you want history, read a book!  Even if we’ll never learn her true secret, what we’ll always have are the Marilyn photos – thousands of wondrous images of a beauty we cannot fathom.  Also there’s that riveting onscreen presence, the memorable film roles, that voluptuous yet strangely chaste body, the tender gaze of a lost child, and the sense of wonder she brought out onscreen.