THE OLD SETTLER ...in Los Angeles 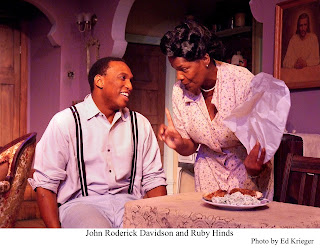 An old settler is a coarse name for an old maid, but, in this case, it also suggests one who settles. This poignant play by John Henry Redwood is about a 50 year-old woman, in 1943, who is given the choice to embrace life, take a risk and find joy. A man twenty years younger offers her love and passion, but the society she lives in, personified by her sister and a young party girl, challenge and intimidate her.

Elizabeth is not a fighter, she’s a nurturer. Although a strong woman, she is dominated by those who mock and degrade her, whose actions are self-serving, and who can only love her when she is in defeat. The play often seemed to suggest the song lyric - some people get their kicks stomping on a dream - from “That’s Life.” However, Redwood understood the mores of the 1940’s and does not let us judge Elizabeth’s choice, or her sister's criticisms, from our modern viewpoint.


Ruby Hinds’ Elizabeth is dignified and deeply loving; Jolie Oliver, is delightfully funny as her unintentionally cruel sister; John R. Davidson, as the young suitor, shows a gentle man naïvely trapped by split loyalties, and Crystal Garrett is sassy as Bessie May, a young gal who knows how to control men through sex.

William Stanford Davis directs with sensitivity. Set design by Thomas Brown, lighting by Carol Doehring, costumes by Grace Goodson and props by Chuck Loring are all redolent of a bygone era.

The Old Settler premiered in 1995 at the O'Neill Theatre Conference and in 2001 was on PBS-TV starring real-life sisters Debbie Allen and Phylicia Rashad.
Posted by THEATRE SPOKEN HERE by Morna Murphy Martell at 10:26 AM