JESUS HOPPED THE "A" TRAIN …in Hollywood 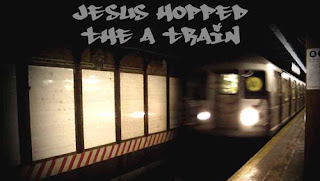 I only managed to catch the closing performance of this brilliantly written and executed play by Stephen Adly Guirgis, who is fast becoming my favorite contemporary playwright. Having been bowled over by his Judas Iscariot trial play last month, here we are again drawn into his world of pain, sorrow and madness that ultimately challenges our own concept of love and compassion.

A young Latino man, ironically named Angel, is thrown into Rikers Island after having angrily shot a phony religious leader who had brainwashed his dearest friend into a zombie acolyte. Here he finds himself drawn down into the first levels of Hell, as he is assaulted by a sadistic guard, brutalized by other prisoners, and faced with the possibility of perhaps never being free again.

Heading this superb cast is Victor Anthony, as Angel, so fiercely adamant in claiming his innocence that we believe him; Kathryn Taylor Smith, is delightful as his attorney whose sentimental nature is at war with her ethical standards; Jacques C. Smith, as Lucius his sole friend, is dynamic as a serial killer whose only lifeline is a belief in a forgiving God; Justin Huen, subtly reveals the cold reasoning of a guard who enjoys using violence over men in his power; and Mel Hampton, as a kindly guard, persuades us by his merciful behavior that he cannot condemn a man no matter how evil his past actions.

Under Ashley Teague’s forceful direction we are drawn into a world where the price of survival is too often madness. Percussionist Jen Schwartz, live onstage, provides a dramatic background of sound throughout. The stark set by Johnny Burton, lighting by Ivan Robles, and costumes by Carlie Tracey, imaginatively suggest the prison world. Unseen inmates voices are played by Arthur J. Mahone, Robert R. Smith and Ernest Shepard.

Produced by Kelly Shea and Devon Colbert, of The Collective Studio, in cooperation with The Rescue-A-Life Foundation. Performed at The Lyric Theatre, 520 N. La Brea Ave., Aug 9-25. Proceeds benefit The Rescue-A-Life Foundation that provides services and housing to the Homeless, to Veterans and to the Formerly Incarcerated and their families. www.rescuealifefoundation.com