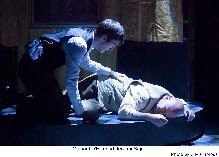 In Oscar Wilde’s only novel, The Picture of Dorian Gray, a beautiful young man in Victorian England makes a pledge with the Devil. Realizing that one day his beauty will fade, he expresses a desire to sell his soul to ensure his portrait will age rather than him. When he subsequently pursues a life of debauchery, his wish is fulfilled, and the portrait ages with each sin he commits. While keeping close to the details of the novel, this show highlights his double life by adding a demonic character to illustrate his downfall. 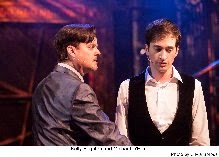 In its day the subject was considered scandalous, but in our modern world Dorian’s hedonism would barely raise an eyebrow. Attending male or female brothels, losing himself in opium dens, even killing in a petulant rage, unfortunately seem rather ho hum today. Also the show confuses us by placing it in no clear time and place. However, author, musical director and songwriter Chris Raymond manages to bring some passion to the play through the often dazzling musical numbers choreographed by Tania Possick.

It’s an ambitious musical with a huge and earnest cast led by Michael D’Elia as Dorian; Toni Smith as the Demon; Cassandra Nuss as the doomed Sybil; Kelly Brighton as snobbish (Sir) Henry; Lauren Hill as no-nonsense Madeline; Jeremy Saje as the artist; Michelle Holmes as an hysterical mother; Tony Graham as her vengeful son, and some delightful bits by Andrew Diego and Kevin Corsini. 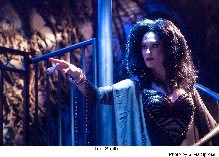 Photos by Sylvia Spross.
Also reviewed in the July issue of NOT BORN YESTERDAY
Posted by THEATRE SPOKEN HERE by Morna Murphy Martell at 1:35 PM