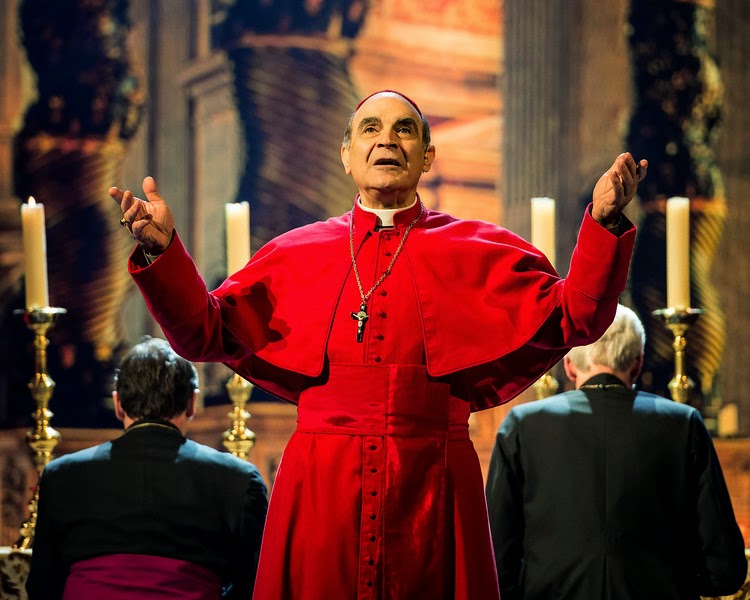 Had a wonderful time at the Ahmanson Theater seeing David Suchet in "The Last Confession." This remarkable play’s revealing of ecclesiastical malfeasance made me think of poor Galileo Galilei, a man of science and faith. He learned the Church's message the hard way and evidently so did Pope John Paul the First. This almost forgotten Pope, a humble man who was about to overturn the old order, died September 28th 1978, age 65, after a reign of only 33 days. If this sounds like the trappings of a great murder mystery it is. The play, a first by lawyer Roger Crane, brilliantly defines the web of intrigue and the Vatican's brutal enforcement of church doctrine. 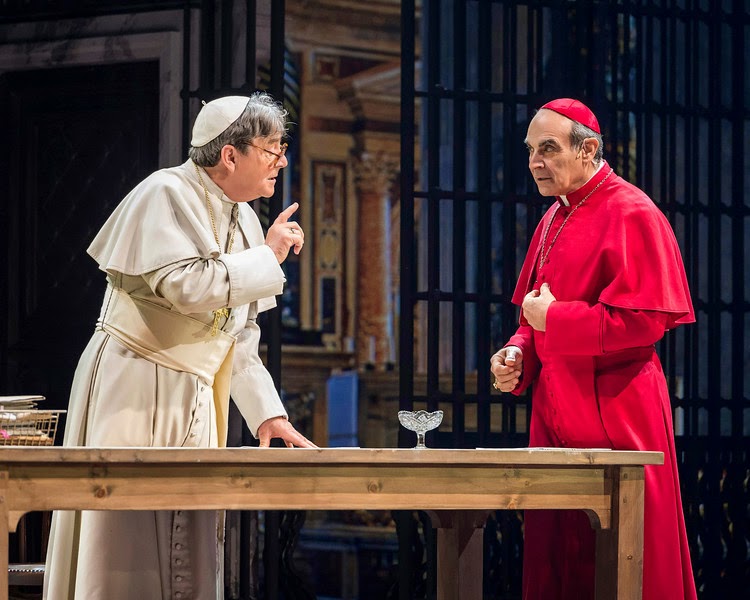 However, "History always has a witness" and here it is Suchet’s Cardinal Benelli, racked with guilt because he left this gentle Pope to the mercy of the Vatican wolves. It is after all history and the seeds of who did it are still embedded in this tree.

I think the Bishop from Chicago, who controlled the Vatican Bank, was a Windy City mobster and clearly belonged to the political underworld. He was about to be fired from a pure cash job, no more double dipping into the Vatican's coffer's. Then, because the head Cardinal wanted the old council back, all the evidence mysteriously vanished, and left no clues, mere hours after the Pope's death 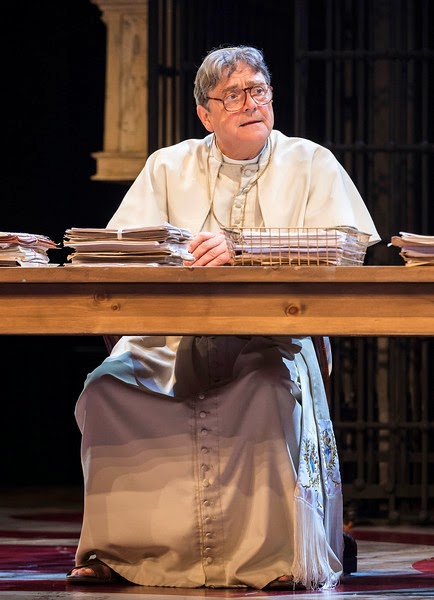 Richard O’Callaghan is heartbreaking as the Pope who naïvely thinks of himself as the country priest for the people. This dynamic Chichester Festival Theatre Production was directed by Artistic Director Jonathan Church. Set design is by William Dudley, lighting by Peter Mumford. The costumes by Fotini Dimou were limited by the reality that most of the cast were in similar red robes which made it difficult to identify each one. Still, it’s a not-to-be-missed evening of theater.

The Ahmanson Theatre is at The Music Center, 135 N. Grand Avenue, downtown LA, through July 6. Tickets at (213) 972-4400 or online at www.CenterTheatreGroup.org

Note from Morna: Some years back I starred Off Broadway as Maria Feodorovna, the Czar's mother, in Anthony Maldonado's historic drama THE LAST ROMANOV. Anthony is a Renaissance man, being not only a devotee of Theater but also an expert in the Art and Antique World. He recently moved to live in LA and chose to settle Downtown. He is a columnist for the DTLA newspaper GALLERY ROW/ART WALK NEWS (thegrawn.com).
Posted by THEATRE SPOKEN HERE by Morna Murphy Martell at 12:01 PM