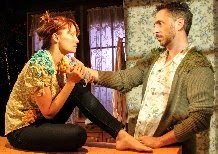 Max and Stephanie, who were once passionately mad for each other, have settled into a polite domesticity, while Sandy and Maddie, who were once ingenuous sweethearts, are now suffocating under the weight of parenthood. Amid bright chatter and clever talk both couples give an appearance of harmony. Yet, two of the partners are involved in a sexual escapade while the others dream of escape. Playwright Maura Campbell briliantly shows how these hidden needs threaten to destroy both marriages. It’s an intriguing play, with a Chekhovian view of modern relationships, where the image we project is in direct contrast with the yearning child within.

All in the ensemble cast are riveting: Avery Clyde and Adam Mondschein are the sophisticated couple with an apparent perfect marriage, Jessica Noboa and Patrick Joseph Reiger are in constant conflict as both parents and wary allies, while Kara Hume is an almost supernatural being as their child carrying the weight of her parents angst.

Hume also displays a beautiful voice when she sings an aria suggested by the play’s opera title.

Directed with bold energy by Jeffrey Wienckowski, the garden-like set is by Christopher Scott Murillo, with lighting by Boris Gortinski, sound by David B. Marling, and flower-bedecked costumes by Halei Parker. Produced by Zeljka Z Gortinski and Ellie Jameson for Road Theatre Company.

Photos by John Lorenz.
Also reviewed in the July issue of NOT BORN YESTERDAY.
Posted by THEATRE SPOKEN HERE by Morna Murphy Martell at 10:15 AM