In a seedy Vegas motel a young thug, Wally, fresh out of LA Trade Tech, and possible parole, is waiting to break his 26th B-day cherry. His elder roommate, Larry, is all about the $50-G'z his mobster boss is paying him to rub out a certain cocktail waitress turned prostitute. After Larry reveals the plan, and promises something special to his impatient delinquent, Wally splits open the stagnant air with his own version of Elvis Presley's “Jail House Rock.”

Wanting to have sex with his first victim, Wally becomes sexually and emotionally excited when beautiful Audrey saunters onto the stage. Now a high class call gal she is all about style and sex but, after she breaks into a song about her lives misery, Wally falls hard and invites her to run away to Canada with him. After that, events smolder like a cigarette about to start a blaze because if he doesn’t kill Audrey he will himself become the selected victim.

As Alfred Hitchcock would never give away the ending, I'll follow suit. The title comes from the Elvis Presley hit song about Las Vegas and the suggestion that it takes place in Vegas was there but I didn't feel it. There were no signs of Elvis on black velvet décor, or blaring neon lights from a window, no busy local street life or a siren or two - little things that could afford this dynamic play an air of authenticity. 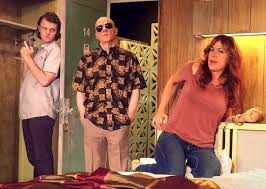 They say great actors are hard to come by but “Bright Light City” brings three of them to this stage with Garrett Michael Langston as young Wally, Leon Russom as merciless Larry, and Heidi James as victim Audrey.

This is the world premiere of Nate Rufus Edelman's dark comedy, that he also co-directed with Angie Scott, and it is produced by Los Angeles Theatre Center.