Before Downton Abbey there was The Manor now in its 12th year at Greystone Mansion in Beverly Hills and still going strong. Here is a site-specific drama that would work as well on a large stage. We are present in 1920 when the Doheny – er MacAlister - family are celebrating the wedding of their son and heir to the girl of his dreams. 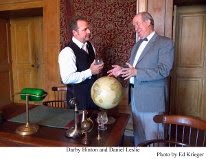 However, even at this celebration there is intrigue afoot: a young caretakers son who loves (and is loved by) the eager bride; a slimy Senator calling in a favor from his now rich old friend; a second wife haunted by the suicide of her predecessor, and a superstitious foreign housemaid who predicts tragedies to come.

And come they do. 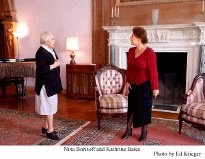 As we move through the glorious mansion in groups of three, we enter private rooms and witness dramas that do not bode well. A domineering mother in law; a manipulative politician; a brooding Heathcliff; a British tart with ambitions; all gathered in the halcyon days of the roaring twenties.

Then ten years later, it all comes to a head before our eyes, in the very rooms we tiptoe through. Some fall apart, others rally themselves, and still others die… but go see for yourself! And be aware this brilliant script by multi-tasking Kathrine Bates is based on actual incidents that took place in the very rooms and halls where we are witnesses.

Also reviewed in the August issue of NOT BORN YESTERDAY.
Posted by THEATRE SPOKEN HERE by Morna Murphy Martell at 10:23 AM