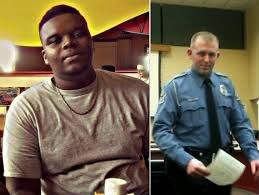 In this adroitly staged reenactment of testimony before the Grand Jury, in the highly volatile and angrily denounced Missouri shooting of Michael Brown by police officer Darren Wilson, the program states, ‘hear the truth on stage.’

But good Theater is not the same as good Law and to reduce 25 days of testimony down to 90+ minutes, and select only certain passages by a few witnesses, hardly delivers an unbiased report on this controversial case.

By making the selections he does, playwright Phelim McAleer begs the question: Who to believe? With only words to work from, as a theatrical event this was intriguing and well staged, but as a reenactment of the actual hearings it falls short. Yes, there was a media frenzy over what really happened, and the grand jury did exonerate the officer, but selectiveness only obscures the entire truth.

As theater it’s a great show, but as an attempt to set rumors to rest it doesn't work. Verbatim theatre is a noble concept but, through sub-text, an actor creates emotion that can color a line with numerous interpretations.

Words in themselves are not evidence and, unless you served on that Grand Jury, you can never know how each witness impressed their audience.