ACTING OUT INK FEST! …in Hollywood 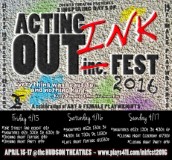 A 21 Gun Salute to 2Cents Theatre Group for their 3-day INK Festival of 21 Plays by Female Playwrights. I was only able to drop by on Saturday afternoon and see four of the plays but the quality of the writing, directing and acting was high.

Of my four, favorite was Allie Costa’s sensitive Raise Your Hand about the disintegration of a love affair, directed by Miranda Stewart; next was the impressive if confusing Twisted by Joni Ravenna, directed by Joel Asher, with an awesome performance by Rebecca Reaney; the lady-in-a-box Broken Latches by Deanna Ableser, directed by Josh Galitsky, was amusingly absurd, while Message From Patagonia (set in South America) by Faye Sholiton, directed by Laura Stribling, gives fair warning to nosy visitors.

Lets not overlook Producer & Artistic Director, Kristen Boulé; Literary Director, Tiffany Roberts-Asta; and Festival Manager Jen Schwartz. If the rest of the plays were as good – which I have no doubt they were – this 3rd annual festival deserves to have a 4th.

At the Hudson Theatres in Hollywood! April 15-17. Visit www.2centstheatre.com for information on submitting for next year. For more details on what you missed, go to their www.facebook.com/2centstheatre.

Posted by THEATRE SPOKEN HERE by Morna Murphy Martell at 9:50 AM