This dark comedy is set outside two TV production’s writers’ rooms, where hopeful assistants juggle their daily tasks while hoping for a chance at success. In this wonderfully absurdist play, writer-director Phinneas Kiyomura certainly knows the territory.  Seems everyone in Hollywood is writing a screenplay – or stage play – while toiling in the dungeons of TV-sitcom-land. Here, in two string-theory-like universes, two hack writers struggle to secretly write a masterpiece based on their own angst and rage. 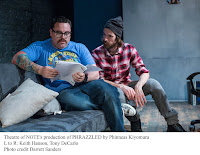 Somehow their worlds parallel each other with the same humorously predictable ending. You see, there is this young devil-may-care pal who has the chutzpah and the connections to make their dream come to life on a major stage. Success is imminent for all. Right!

There is comedy in the patter but under it a dark shadow since in Tinseltown there are no friends and betrayal is merely an occupational hazard. As they should all know well by now. 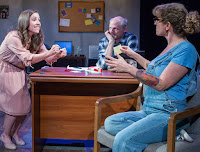 Under Kiyomura’s energetic direction, the cast give it full force. Tempestuous Tony DeCarlo and urbane Troy Blendell are well matched as the writers striving for success in Hollywood; mercurial Will McFadden is their enigmatic savior; Keith Hanson and Andrea Ruth are delightful as their inevitably envious fellow-workers; while Sierra Marcks and Gina Garcia-Sharp portray female bosses from heaven (1) and hell (2).

At Theatre of NOTE, 1517 N. Cahuenga Blvd. (north of Sunset) through May 21. Tickets at 323-856-8611 or www.theatreofnote.com
Photos by Darrett Sanders.
Also reviewed in the May issue of NOT BORN YESTERDAY.
Posted by THEATRE SPOKEN HERE by Morna Murphy Martell at 11:32 AM