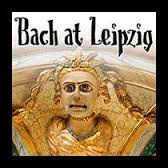 In Itamar Moses historic farce, we are at a sort of American Idol contest in 18th century Germany where a group of illustrious classical organists have assembled to audition. Since half of them are named Johann, and all are avowed enemies, there is a lot of confusion and whispered intrigues. However, one needed a deep knowledge of history to appreciate the drama and, personally, I was non-plussed. 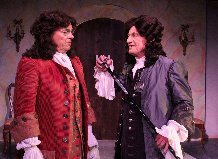 Not being a classical music aficionado I felt baffled by the in-jokes and historic references that hopefully had meaning to other audience members. Where was the Johann of the title? A chubby guy with white curly hair did prance through a few times, but it was left for us to surmise this was the great musician himself. 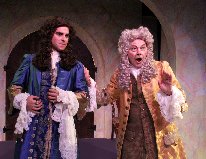 Now for the fun part. The actors were marvelous and having a great farcical time, led by Chris Winfield and Larry Eisenberg, who smite and parry at each other with delightful fury; Troy Whitaker and Mikel Parraga-Wills represent the embattled younger generation; Todd Andrew Ball is poseur extraordinary, and Lloyd Pedersen a befuddled darling. Steve Terrell, apparently as the great Bach himself, has exuberant walk-bys.

Calvin Remsberg expertly directs in the elegant Comédie Française style, the costumes by A. Jeffrey Schoenberg and set by J. Kent Inasy are lavish enough to make Moliere green with envy, while sword fights are scarily choreographed by Adam Conn.