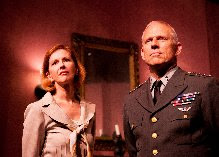 The question of what defines a man is heavily explored in this new play by Jack Betts and the story is intriguing even if its creation is overly didactic. Four-star general, Douglas Gallegher, barks orders at his sons as if they were troops under his command and is determined to send them away to military school.  It’s no wonder they hate him, and why his wife puts up with him is an unsolved mystery. What apparently changes Douglas into a human being is the realization that thirty years before he almost destroyed his gay twin brother. But it’s hard to believe in Douglas’ spiritual awakening and the revelation when it comes is told in words but not believable action. Sometimes the dialogue sounds like speeches from an article on the subject and one feels a message hitting us over the head. Yet beneath this is a strong human story – brother against brother – father against sons – that one wishes was explored more deeply.
Kevin McCorkle, as Douglas, plays the bully well but never lets us see other dimensions; Rachel O’Meara, as his wife, is so naturally fearless it suggests that her husband possibly has lighter moments; Justin Preston and Edan Freiberger, as their two sons, are dynamic as a punk rock duo, then totally believable as dutiful sons being sent to emotional death; Laurie O’Brien has a challenging role as a mysterious woman artist guarding a secret, and a manuscript, that can shatter all their lives or bring resolution to their conflicts.
Produced by David Bartlett and directed by author Betts, the production is graced by a number of exquisite sets by Jeff McLaughlin, that are sadly marred by the length of time needed to change them. The excellently chosen costumes are by Kellsy MacKilligan.
At the Marilyn Monroe Theatre, Lee Strasberg Center, 7936 Santa Monica Blvd., West Hollywood, through May 5. Tickets at www.ItGoesLikeThis.net/tickets/ or call (800) 838-3006. 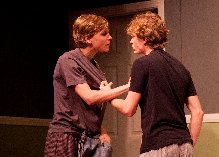