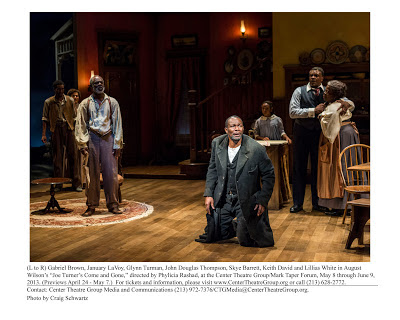 In the old blues song, Joe Turner is a mystery man who brings food and comfort to the distressed but, in this dynamic play, he is the power that strikes a man down. Set in Pittsburgh in 1912, Joe Turner's Come and Gone is the second in August Wilson's Century Cycle, which illuminates the struggles and lives of African Americans throughout the 20th century. This play, that ran on Broadway in 1988 for 105 performances, focuses on former slaves making a fragile living in a Northern city, many of whom continue into other plays in the cycle.
Kind landlords, Seth and Bertha Holly, run a boarding house where clearly they never turn anyone away – no matter how dodgy. There is Bynum Walker, an oracular old man who slaughters pigeons for their blood and does home grown voodoo; there is young Jeremy Furlow, who works as a laborer on the roads but is a proudly talented guitarist; there is Mattie Campbell, a Texas gal who wants the magic man to bring back her fickle lover, and Molly Cunningham, a vivacious young woman of dubious reputation. Into this mix strides Herald Loomis, looking like an avenging specter, with his innocent girl child in tow. Turns out he has been released from Joe Turners chain gang after seven long years, and is now searching for the wife he left behind. Whether to kill her or embrace her only time will tell.
Wilson's "Pittsburgh Cycle" consists of ten plays - nine of which are set in Pittsburgh's Hill District, an African-American neighborhood that takes on mythic literary significance like William Faulkner’s Yoknapatawpha County. Each play is set in a different decade and, as Wilson has said, aims to "raise consciousness through theater” and echo "the poetry in the everyday language of black America."
Leading this superb cast is John Douglas Thompson as a powerful Loomis; with strong assistance from Glynn Turman as Bynum; Keith David as Seth, and Lillias White as Bertha; also excellent are Gabriel Brown, January LaVoy, Vivian Nixon, Raynor Scheine and Erica Tazel. Child actors Skye Barrett and Nathaniel James Potvin are delightfully professional.
Director Phylicia Rashad boldly illuminates Wilson’s paradoxical style as it segues from naturalism to melodrama to hyper realism to surrealism. Plaudits for scenic design by John Iacovelli, lighting by Allen Lee Hughes, sound by Cricket S. Myers, costumes by Karen Perry, Wigs & Hair by Carol F. Doran and original music by Kathryn Bostic.
At the Mark Taper Forum, Los Angeles Music Center, 135, N. Grand Ave, LA, through June 9. Tickets at (213) 628-2772, Center Theatre Group Box Office, or www.CenterTheatreGroup.org.
Posted by THEATRE SPOKEN HERE by Morna Murphy Martell at 2:41 PM