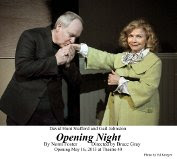 With more than 40 commercially successful comedies, playwright Norm Foster is known as the “Canadian Neil Simon.” Judging from “Opening Night” it’s a well-earned title. In this hilarious behind-the-scenes farce, total mayhem rules. Here’s a backstage comedy full of show biz clichés that turn out to be absolutely true. Opening night jitters – the nerves – the jealousies – the tantrums – the lines forgotten or better forgotten – primal terror – a bucolic farm drama in disarray. In the end, when faced with disaster, reach for the Bard, “We are such stuff as dreams are made on…” and the plebeians will be awed and satisfied. And we sure are. 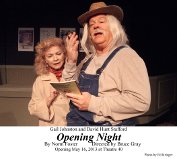 Under Bruce Gray’s brilliant, fast paced direction the entire cast become a superb ensemble. Richard Hoyt Miller as a Shakespearean actor famous for a TV commercial; Martin Thompson as a harried director whose private life is about to implode; Meranda Walden as his rich, sexy and demanding fiancé; Gail Johnston as a ditzy housewife in love with Art; John Combs as her sports-loving husband; Ilona Kulinska as an ingénue whose boobs are bigger than her talent; David Hunt Stafford as a classic actor doomed to play a rustic, and Eric Keitel as an eager wannabe thespian. Plaudits to all.
Producer for Theatre 40 is David Hunt Stafford, with set by Jeff G. Rack, lighting by Ric Zimmerman and costumes by Michele Young.
At The Reuben Cordova Theatre, Beverly Hills High School campus, 241 S. Moreno Drive, Beverly Hills, through June. Tickets: (310) 364-0535 or www.Theatre40.org.
Reviewed for June issue of monthly newspaper, Not Born Yesterday.