YEARS TO THE DAY… Beverly Hills 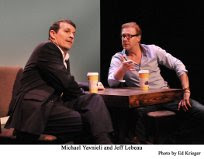 In this brilliant new play, two middle-aged men who have been friends for decades get together for coffee. Sure, it’s been four years to the day since they met face to face but hey, they kept in touch by email and twitter. But, as playwright Allen Barton makes clear, never mind all the blather about social media, there’s no match for face to face meetings with old friends. And this is a meeting you wouldn’t want to miss because here is a devastating and hilarious dissection of the meaning of friendship.


Think of a person you love and hate, who can exasperate you to the point of murder, who vehemently disagrees with you politically, who’s known you since you were both young and naïve and you went through shit together. You’re old war buddies, no need to be polite, no need to be careful what you say, right? But watch out. If you want to forget what you were, and burn that bridge you were on, with this friend you are naked, vulnerable, because they knew you when! Yet Barton shows us that because no one else knows you like this, because you can never go as deep with new people, because you can’t hide who you are, there is authenticity in friendship. Say whatever you want, the friendship might even crash and burn, but if it’s a true friend you can always give them a hug – always.

Michael Yavnieli, portrays Dan as a dominant force, angrily covering a soul full of regrets. Jeff LeBeau is more subtle as Jeff, whose life is hurtling in directions he never dared explore. For a riveting 90 minutes we share their lives and, in this writers case, are left hungry for more. Barton’s raw, dark comedy, under the strong direction of Joel Polis, radiates the energy of early David Mamet. The minimalist set by Jeff McLaughlin (table, chairs and coffee containers), and sound by Chris Moscateillo, focuses the action and suits the material well.

“Years To The Day” is produced by Gary Grossman for Skylight Theatre Company. At the Beverly Hills Playhouse, 254 South Robertson Blvd., Beverly Hills, through June 2nd. For reservations: (702) 582-8587 or www.ktcla.com
Posted by THEATRE SPOKEN HERE by Morna Murphy Martell at 12:29 PM