PETER PAN: THE BOY WHO HATED MOTHERS… in Hollywood 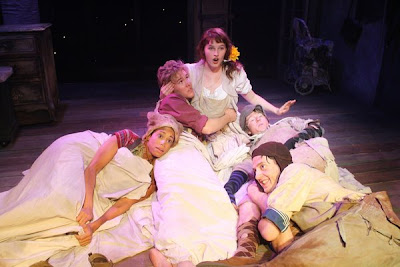 In 1866, when he was six years old, James Barrie’s elder brother, David, drowned. Their mother was inconsolable, and all his life James tried to make up for the lost son. He always felt he was not as loved as David and even tried to dress and act like him. At age 44, he wrote what he called a "fairy play" about an ageless boy who was rejected by his mother when she had another child. “The Boy Who Hated Mothers” was his working title for what eventually became the magical “Peter Pan.”

Knowing what we do today, this play becomes a vivid glimpse into the mind and creative process of a genius. The title may scare away parents with young kids, but there is no disrespect in this wonderful, imaginative play. This is about children’s games and reaches into unconscious places where, in our dreams, we can conquer fear.

Here is an intriguing retelling of the story of The Boy Who Wouldn’t Grow Up and playwright Michael Lluberes vision is true to J.M. Barrie’s original haunting drama. In this tale, Wendy has the wisdom to go back to the real world, while the fear of growing up condemns Peter to an eternal childhood. But it also means children can visit him in Neverland today for, as Barrie said, this cycle will go on forever.

As Peter, Daniel Shawn Miller is dynamic as a young man determined to live for play; as Wendy, Liza Burns segues charmingly from a child to a young woman; as Mrs Darling, Trisha LaFache is deeply moving when mourning for a lost child, then transforms into a delightfully sadistic Captain Hook; as John Darling, Benjamin Campbell is a prim boy transformed by freedom; as Tinkerbell, Amy Lawhorn manages to make a light bulb throb with life, and as Lost Boys, David Hemphill and Jackson Evans play fierce pirates and lonely kids impressively. Fine British accents courtesy of dialect coach Coco Kleppinger.

Director Michael Matthews surrounds the characters with imaginative theatrical illusions. The set by Mary Hamrick is a fantastical mishmash, with props by Michael O’Hara, lighting by Tim Swiss and Zack Lapinski, and sound by Rebecca Kessin. Costumes by Kellsy MacKilligan capture the Victorian era and fights are choreographed by Sondra Mayer.
At The Blank‘s 2nd Stage Theatre, 6500 Santa Monica Boulevard, Hollywood, through June. Tickets online at www.TheBlank.com or call (323) 661-9827.

Reviewed in the June issue of NOT BORN YESTERDAY.
Posted by THEATRE SPOKEN HERE by Morna Murphy Martell at 1:59 PM